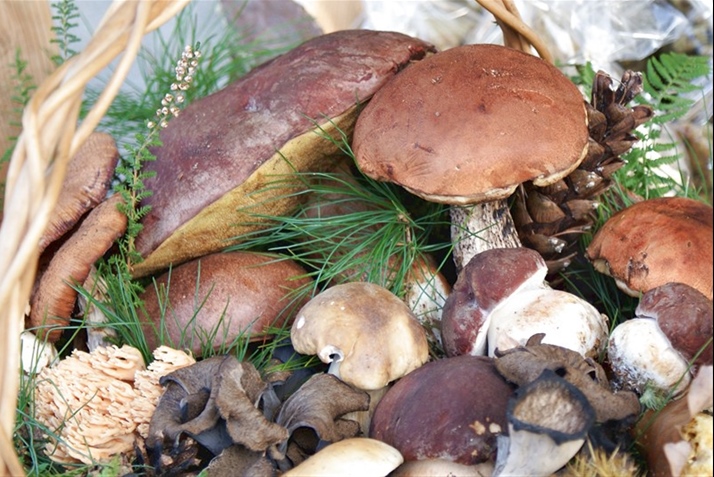 Nature and mushroom lovers and other visitors who came from Zagreb by "Mushroom Train" went to the independent or organized picking of the mushrooms in forests of the Medvednica Nature Park. They could create their mushroom basket and the most beautiful got an award provided by the "Maglen" from Oroslavje.

After returning from the forest, a member of the Mushroom Society "Kamilo Blagaić" from Zagreb, Mladen Strižak, held an lecture and did determination of the picked mushrooms. Visitors could also enjoy the mushroom, hunter and fish kettle as well as other gastronomic delicacies prepared by members of the Mushroom Association "Blagva", Hunting Association "Jazavac" Pila - Stubičke Toplice and members of the Sports and Fishing Society "Stubaki ". The gastronomic offer was enriched by the cep specialties of the Hotel "Matija Gubec", traditional cakes and roasted chestnuts prepared by the Association "Hrvatska žena" Stubičke Toplice, the pastries of the Zabok Secondary School, cakes by the Pensioners' Association of Stubičke Toplice as well as the Swiss Sausages by the Swiss-Croatian Association in Stubičke Toplice. A good wine was provided by the Association of Winemakers "Peharček" and the Winery "Sever". In addition to the wide range of offers, there was also a diverse offer of domestic eco-ethno products and the presentation of family farms of this area and the art workshop of the artist of Zagorje County. For the youngest visitors of the event, the employees of the Public Institution "Medvednica Nature Park" and the Public Institutions for the Management of Protected Areas of Nature of Krapina - Zagorje County have organized creative - educational workshops. Work of the members of the Student Association "Bobi" of the Primary School Vladimir Bosnar Stubičke Toplice was also presented. The youngest visitors enjoyed horseback riding on wooden toys and traditional horse-drawn wagons of the County Farmers' Association of Krapina or riding on the horses of the Horse Riding Club from Stubičke Toplice. The event was attended by the mayor of Krapina-Zagorje County Željko Kolar, mayors of neighbouring municipalities and Swiss Ambassador Stefan Estermann.

As part of the international cooperation project implemented by the Municipality of Stubičke Toplice with the French Association "Servir la paix" - Serving Peace, the members of the friendly association spent a pleasant and fulfilling day at the Mushroom picking event. For a pleasant Saturday's gathering, music and entertainment took care a local musical band the Črleni lajbeki. In the evening, a performance of "Footloose" band was organized at the Temple Bar in the center of Stubičke Toplice.

The next day, on Sunday at the Maksimilijan café, was offered sweet and savoury specialties with mushrooms, accompanied by a professional lecture by Mladen Strižak about mushrooms, with the offer of the family farms of the thermal district and the performance of Trend evergrin and Old timer bands. The media sponsor of this year's Mushroom picking was Radio Stubica with program host Senka Susović.